A published letter to the inhabitants of Plymouth, concerning the erecting of a monument to the fallen veterans from the town.

The proposed monument for the fallen veterans that perished in the Civil War from Plymouth, Conn., and all that pertained to its erection, was brought out in this broadside, by a local historian, Bela B. Satterlee.  It is dated December 1865, and signed.

In the form of a letter, Satterlee seems to desire to stir up inhabitants with the causes for the war all over again, blaming the South for their personal lose, and proceeds to bring up the possible areas of contention were the propose monument might be permanently placed.  Satterlee goes on to suggest the material must be native granite, and the cost should not less than $10,000.00.

The monument would be erected in 1866, and would be considered the first veteran’s monument recorded for its early dedication just after the war, and also the name of Abraham Lincoln is also a rarity as well.

Satterlee was born in 1818, and died in Plymouth in 1898.  Spending his early life in Ohio, farming and learning the shoe making trade, he would later return to Connecticut. 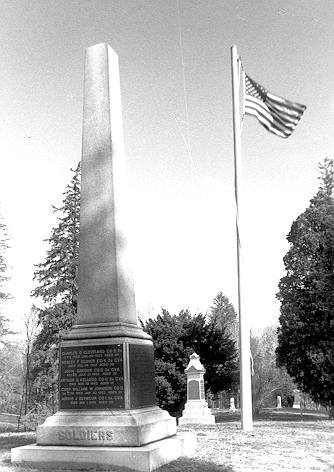 Interesting content.  Condition is fine with bold signature of a true historian of that town.

Do NOT follow this link or you will be banned from the site!
MENU