This muster roll dated Washington, D.C., June 30, 1865, lists the officers and enlisted personnel in Company “F,” 5th U.S. Cavalry.  It names 2 officers (both 1st Lieutenants, one on detached service), 4 sergeants, 2 corporals, 1 bugler, and 32 privates.  Most of those listed have remarks beside their names, describing recent actions such as, promotions, reduction in rank, payments due, detached service, and joining company, etc.  On the other side lists deserters, and discharged. Many of the these listed have signed the document, and attested to by 2nd William H.Churchill, commanding company. A small receipt for payment to one soldiers is glued on the muster roll, and signed by Additional Paymaster E.D. Brooke.

The reverse side has written in “Record Of Events…” The Company has formed a part of the Escort to Lt. Gen. Grant Comdg Armies of the U.S. Since March 23rd, 1864, and Since last muster has been Stationed at Washington, D.C.”   Signed and dated by W.H. Churchill, 2nd Lt. 5th U.S. Cav. Commanding the Company, also by Julius Wilmot Mason, Capt. 5th U.S.C. & Bvt Maj, U.S.A., Inspector and Mustering Officer.

William Harvey Churchill, was born in Indiana.  He was private, corporal, sergeant, and 1st sergeant Co. K, 2nd, and 5th Cavalry, 3 July, 1855 to 18 July, 1864. 2nd Lieutenant, June, 1864, and escort (bodyguard) to General Grant to January, 1866. 1st Lieut. 5th Cav., August, 1866. Brevet 1st Lieut., and Captain, U.S.A. for gallant and meritorious conduct during the campaign terminating with the surrender of the Insurgent Army under Robert E. Lee.  He died August 20, 1866 from an injury received by a fall from his horse while drilling.

The document is in very good condition with some minor issues along edges, etc. Size approximately 22×30 inches.

An historic document signed by two officers who were General Grant’s bodyguard during the last year of the Civil War. 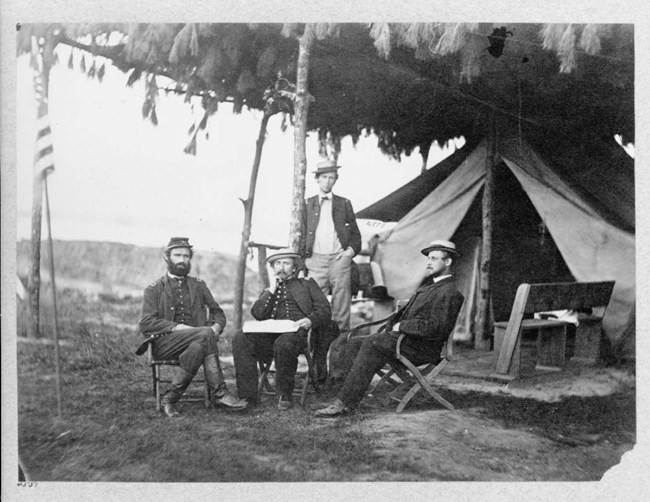 Mason is seated in the center of this June 1865 photo taken near Washington, DC, in June 1865.  (Lib. of Congress). The bearded and older 2nd Lieutenant to his right, may very will be William Churchill.