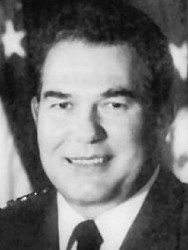 Harley Hughes was commissioned through the Reserve Officer Training Corps program in 1957 upon graduation from Oklahoma A & M College, Stillwater, Oklahoma.

Began his career in the cockpit with service in Vietnam, where he was award the Silver Star Medal for gallantry in combat while flying his F-4 fighter (448th TFS, and award the DFC with 3 oak leaf clusters with this same unit). Director of Strategic plans and operations (1982-85),  Deputy Chief of Staff plans and operations (1985-88). He retired in 1988 as a U.S. Air Force Lieutenant General.

The command pilot wings are hallmarked NS MEYER (silver filled), and the large and mini JCS Badges are both MEYER hallmarked in clutch back. (no clutches for the insignia). The US collar insignia are both hallmarked STERLING. The generals stars are silver filled, a pair by MEYER, the single hallmarked “HLP”.

There are 3 miniature medal bars that include all he was awarded, and another earlier single bar that is from his Vietnam service days. This last one by itself is quite a group.

A nice history, and good group for a career Air Force officer.